This is Part Two of a two-part interview with the creators of The Three Wise Men, about their love for Christmas and their journey through Warner Bros. Animation and Illumination Entertainment to end up where they are today.

Yarrow had served as an animator on another cult animation favorite, The Iron Giant, in 1999 as a CGI animator. It’s a time that the couple reflects on fondly, acknowledging that the Iron Giant action figure remains prominent in their office, a reminder of the time they spent dreaming with others. The Iron Giant is another film that has gained traction beyond its theatrical run, and it represents the transition from traditional pencil-drawn animation, flipping every single move of each character forward, painstaking step by step.

In 1997, Warner Brothers had decided to create the film using traditional animation with the exception of the Giant character who would be CG using relatively new software similar to that used for Toy Story which caught the world’s attention in 1995. This was Yarrow’s first exposure to 3D, mixing 2D and 3D materials, and it gave them the tools to make The Three Wise Men in 3D.

“Traditional and CG animation are different but also really similar. The moviemaking process is the same,” they explain, “it’s just that now we start with the concept artwork done digitally. We can do that with the Apple stylus and iPad or things like Photoshop. They’re just new tools we use to design and tell stories.”

Together, the Cheneys use Yarrow’s Grinch to explain the animation process. Yarrow drew, painted, and prepared the image of the character. Getting the thumbs up, the image is then created as a 3D model in space on the computer, and developed like the old stop-motion character. Other people add on the surfaces, the textures in space, like the way that the Whos of Whoville have fur. Now a character like the Grinch is a three-dimensional character and goes through rigging.

The rigging provides the skeletal and facial system so the character can be manipulated. This allows the team to explores his personality — how he’ll walk, run, smile, frown, etc. The animators take the character and pose it, moving it around a series of key frames over time. The final scenes are rendered with the environment, special effects and lighting.

“That means the character and each scene are worked on by all these different people,” Yarrow says.

In the case of The Three Wise Men, the Cheneys did all of the development work out of their apartment, creating and editing the story reel with storyboarded scenes. “This provides a blueprint of the film that we can then shepherd as directors as we work with the crew. The goal is to end up with this finished movie that feels like one piece of art,” they share. “There are tons of conversations all along the way, with other people who are catching the vision and bringing their skills and gifts to make the project better.”

That sense of collaboration has opened doors for the Cheneys, primarily through Universal’s Illumination Entertainment. But they have always had an eye for the way that the stories can bring people together, how they can exhibit faith.

“The Grinch is not a Christian story but it’s about a hurt person who is in isolation,” Yarrow explains. “We can all relate to him in some way. The story Dr. Seuss tells about a person making a 180-degree turn from so low and miserable to someone who experiences grace and redemption. We watch him shed the things that held him down… Christmas is about the Lord bringing us back. Christmas is about redemption. The Grinch finds forgiveness and joy. And he finds real community.”

“Stories are always about transformation, how people go through an ordeal and learn a deeper truth, they realize something they didn’t see before. The Grinch can meet so many people in a world that doesn’t often offer grace.”

Carrie adds, “Or believe that people can change. We were so excited that God’s plan was for Yarrow to work on the film.”

That brings them back to The Three Wise Men. Three out-of-towners. Three people who are respected in their own element but nearly deceived by a manipulative king. And they’re not alone in the Christmas story.

Yarrow counts them off on his fingers.

“The shepherds were people no one wanted to be around. Mary and Joseph were not rulers like Herod or Caesar.”

“God called Mary and Joseph. He led the wise men. He invited the shepherds. God pursued them all. The Christmas story reminds us of His love and how He pursues us.”

And with that the couple goes back to work, drawing, dreaming, writing, telling stories. From the cubicle at Cal Arts to the halls of Illumination, and now through three guys following a star, God is using the Cheneys to tell God’s story, to show people how much God loves them, enough to pursue them, with Christmas …

Because Christmas is about redemption.

The Three Wise Men is available now on Amazon Prime.

The Cheneys (Part I): A Couple of Animators Want to Spread the Christmas Gospel 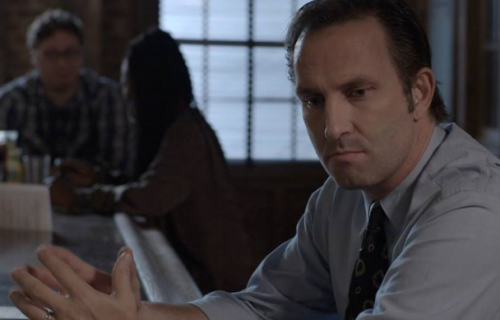